To get into the spirit of silly season, why don’t we have a look at the silliest of man’s creations – homeopathy.  So, here goes, enjoy!

A homeopath will take a substance (or an imaginary substance), go into a state of delirium during a process called ‘proving’, dilute the (imaginary) substance into oblivion and then sell it as a remedy to the public – and regulators are happy for them to do so. During the proving stage, they document their ‘symptoms’ which then magically becomes the ‘indications’ listed on the remedy, according to their ‘like-cures-like’ principle. What usually cracks me up is the starting ‘substances’ that they use, what homeopaths claim their remedies work for, and the fact that homeopaths can keep a straight face while explaining or writing about their remedies (read any ‘proving’ document).

Due to the immense number and diversity of remedies out there, I’ve decided to create three categories. 1. Ridiculous – the starting material or ‘substance’ is nothing which they then dilute into oblivion; 2. Super-gross – substances where you desperately hope that they did indeed dilute everything into oblivion; 3. Weird – you just cannot understand how homeopaths can think of such stuff (there is a huge number of remedies in this category).

For some of the remedies I’ve copied parts of their ‘provings’ (unedited) so that people who do not understand the stupidity of it all, get a glimpse of what’s going on in the deluded (diluted) minds of homeopaths.  So here is the list (thanks for the many suggestions via Twitter.)

“The remedy was prepared by Rowan Jackson and astronomer, Peter Lipscomb, using an 8″ telescope, Meade LX90 aperture telescope. A vial of alcohol was affixed to the viewing end as the telescope was focused on Cygnus X-1’s location within the Cygnus constellation.  Twenty provers took the remedy administered in 30C potencies.”

Uses: “This remedy seems to have a global effect on the body. If you were tracing the sensation under a physical symptom you might expect it to lead to a pulling in or drawing inward, constriction sensation. Headaches are felt as constricting, as if a band or a vise or as if will burst. Heart and chest symptoms are felt as constricting and tightening. Even the extremities can feel tight and constricting. Provers felt their teeth were “drawing inward.” With the drawing in sensation, they would often feel that there was a stone or lump inside (this spot of denseness within their body). Provers had the sensation of a lump or stone in their stomach or abdomen. They could also feel as if there were a “sinking” sensation inside. Often they would explain the sensation as heaviness.”

“I had a dream, as usual, and this guy who comes into my dreams, turns up and says, “Nuala, are you aware that vacuum is the space between heaven and earth? Prove Vacuum!” So I woke up and said, “Yeah, right. How?” I thought about it for a number of months and he came back to me in a dream and said, “This is very simple. What you want to do is get a bottle and put some alcohol in it, then vacuum the bottle, and you will get the effect of vacuum on the alcohol.” He has said that type of thing to me before in dreams, like that remedies are the effect of something on alcohol. “

Uses: “I know that a lot of people died in Britain as a result of that flu. So I started giving Vacuum for it and straight away it worked.”

3. Imaginary substances (hard to come by or extremely dangerous substances, such as Plutonium/Uranium, and apparently also ‘Unicorn’)

“Bearing in mind Crotalus cascavella’s themes of vengeance and desire to kill with a knife, I asked him: “Did you feel like avenging yourself from your wife’s first fling? Would you feel a sense of release if you knifed him in the back? His words immediately evoke in me the theme of the light in Plutonium: he has lost his inner light and refuses the light emanating from others, from outside. Plutonium desires transcendence for itself and for the external world through self-illumination; it wants to be a powerful light which brings order to chaos through its own vibration.”

4. Dog shit ( ‘Excrementum caninum’ not to be confused with ‘excrementum vaccinium’ a.k.a. bullshit)

Uses: self-disgust; domination and extreme abuse; suppression of anger with hatred; low self-esteem with dependency; In this remedy, there are dreams/thoughts of excrements and toilets, in contrast to Lac caninum and Lyssinum. Mind; dreams; excrements/dog’s excrements/ toilet; sitting on/ vomiting; excrements; Ailments from sexual abuse and rape, Delusion or image that body parts/ arms/ legs are smaller, and shortened; Dreams of dogs/ cats, felines

5. Condoms (Latex Condom) – New or used? I guess both, because homeopaths really care about the environment; “Rubber is a disposable substance that we use and throw away but it does not just go away. It persists as mountains of burning tyres or as condoms washed up on polluted beaches.”

6. Intestinal secretion of a sperm whale (Ambra grisea). It is unknown if homeopaths only use sperm whales who died after ingesting copious quantities of used condoms – see above (homeopaths will then call this a ‘combination remedy’) or if they hunt the poor whales themselves.

Uses: Its most well-known keynote is mortification from needing to use a public bathroom due to painful shyness. There is an out-of-proportion timidity about being in the presence of strangers or in social situations. It is said that these individuals often experience premature aging, may be globally anxious, and have a propensity for coughs.

Uses: No sooner does night come on than I am a prey to such dreadfully sinful desires that drive me mad (in a woman). And: Weakness or loss of memory, esp. for names; feels as if going insane; terrible dread of the night season owing to aggravation of all symptoms then; despairs of recovery.

9. South Pole of a Magnet. (Magnetis polus australis – attenuations of media saturated with emanations of the pole.)

10. The note ‘F’ (homeopathic sound remedy Note F in 6X potency) and the colour Blue (or red or whatever colour you feel ‘attracted’ to)

Uses of musical notes; A general diuretic; good for edematous tissues, especially suited for pulmonary and cardiac edema; cardiac regulator and tonic, detoxifier, calmative and tranquilizer. Good for distress, feelings of inner conflict, avoidance of change, and a weakened spirit.

Uses of the colour Blue: A catarrhal remedy, good for sore throats and tired speaking voices; a stimulant to the thyroid and parathyroid; good for substance abuse cases where the patient wants to stop smoking, drinking, or overeating; good for neck and shoulder pain. Good for lack of creative expression, lack of willpower to complete tasks, integrity issues, malicious gossipers, liars, and timid, shy communicators.

It is actually impossible to come up with a Top Ten because there are way too many crazy homeopathic remedies out there, such as; dolphin song, radionics, hoover dust, light of Venus (or the moon), pig’s milk (or dolphin’s milk), X-rays, English sun, water (called new water) ‘unicorn’ (“apparently they sit around a vial of water thinking about unicorns to infuse the unicorn energy” – I couldn’t find any references for this one) etc. Therefore, it might be a good idea to prepare an “annual top ten”- listing only remedies that was invented in that given year. 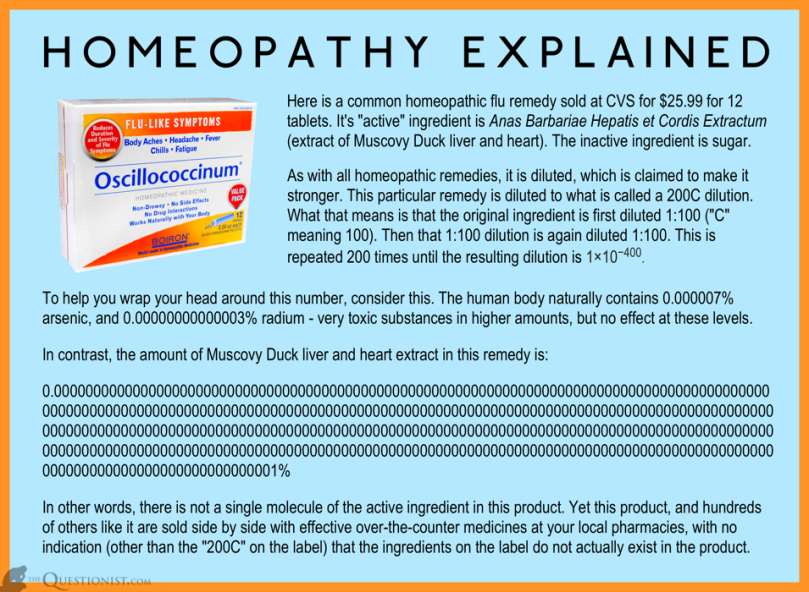 Although these lists are meant to be funny, it does serve the important purpose of creating public awareness. The other side of the coin is that people do get hurt and even die because of homeopathy. Most fatalities are due to neglecting serious medical conditions, but many deaths have also been directly attributed to homeopathic remedies. Homeopaths do use highly toxic substances (arsenic, deadly nightshade etc.) and if they screw up their dilutions, people die – as was tragically shown with the death of 10 infants recently.

It remains to be such a pity that so many politicians, regulators (such as the TGA in Australia – 100% funded by industry incl. homeopaths) and some universities (notably WSU and UJ) simply look the other way, allow homeopaths to continue to mislead the public or even promote homeopathy. The simple reason for this is vested interests, which usually means – money.